BlitzWolf BW-VP4 is the latest projector from the Chinese company Blitzwolf, known for earphones, smartwatches and tech accessories with good value for money. And BlitzWolf BW-VP4 is a projector portatile compact managed by Android operating system that amplifies its functionality compared to that of a standard projector. I'll tell you about it review complete.

Before we start with the review, let's take a quick look at the technical specifications of this projector. BlitzWolf BW-VP4 is equipped with CPU RK3368 Octa Core 64-bit Cortex-A53 with frequencies up to 1.5GHz, GPU PowerVR G6110, 2GB of DDR3 RAM and 16GB of internal memory. Everything is managed from Android to version 7.1 in Italian.

As for connectivity, however, on the back of the projector we have an HDMI port, 3.5mm audio jack, 2 USB ports and input for the 15V / 3A power supply supplied with European plug. There is no shortage of Bluetooth version 4.0 and dual band WiFi. To reproduce the audio, 2 3W speakers are integrated, while the non-removable battery has a capacity of 4000 mAh. At the top we find the following soft touch keys: back, menu, Bluetooth, volume +/- and the 2-touch multitouch pad that works as a mouse. Finally, under the projector we find the standard attachment for the stand. 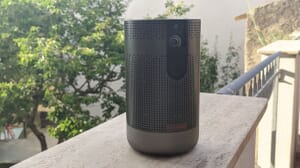 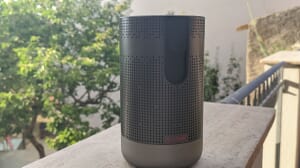 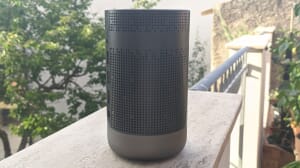 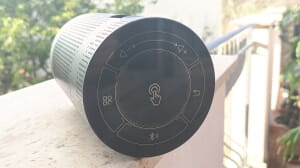 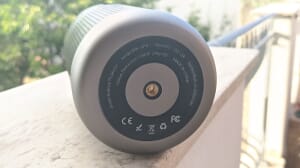 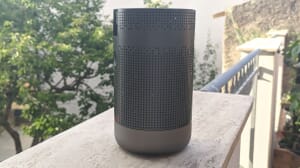 The 21W LED lamp is capable of projecting up 300 ", has a brightness of 300 ANSI lumens and 5000: 1 contrast. The native resolution is 1080p with support for 4K and 3D content. The guaranteed duration is 50000 hours. Above the lamp we find the autofocus and both are protected from dust thanks to a sliding trolley that we can close when we are not using the projector.

The projector has a cylindrical shape with a height of 16.1 cm with a diameter of 9.3 cm and a weight of 875 grams. In the box, in addition to the projector and the power supply, we find a multilingual manual with Italian included and an HDMI cable.

The BlitzWolf BW-VP4 projector has a good brightness that allows visibility even in low sunlight which decreases moving away from the wall while maintaining a discreet visibility. In the dark, of course, things change and both visibility and image resolution are excellent.

Returning to the projection, the native resolution at 1080p is noticeable, the quality is excellent with both streaming and file playback. But I had some difficulties with some movies on USB stick: both in MKV and AVI format theaudio is absent on the pre-installed player. To solve it was enough to install an alternative player through the Play Store, in my case VLC.

The automatic autofocus is really excellent, which in a few seconds manages to perfectly focus the image. It also has a vertical correction of ± 40 °, although in the descriptions it also reports a horizontal correction. In the first case it works really well and by tilting the projector vertically you always get a projection perfectly rectangular. In horizontal, however, the correction is absent and a trapezoidal shape is created. A uniform and rectangular projection, therefore, occurs only with the lamp facing perpendicular to the projection surface. 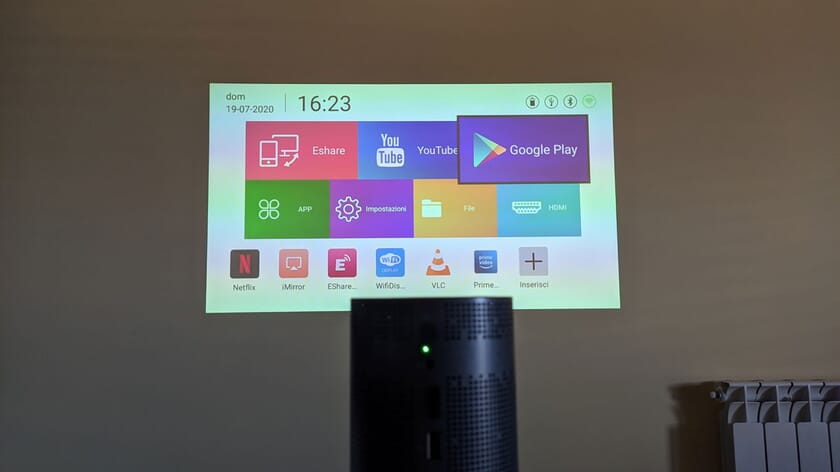 Inclination of about 30 ° vertically 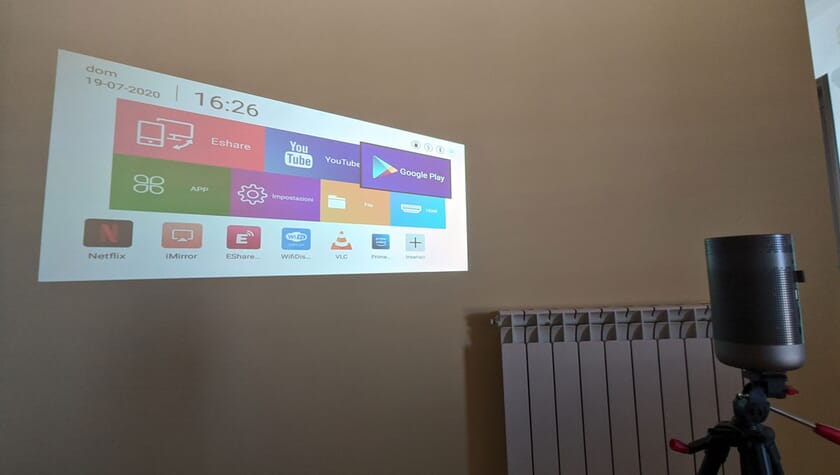 From the settings you can choose whether to project in 4: 3 or 16: 9 format, manually adjust the projection angles and choose two different levels of brightness, but do not adjust their intensity. The standard lighting profile is the one with realistic colors, the second profile instead tends to blue and has certainly been designed for further battery savings. Finally, with the power supply, the brightness increases even more making the images even more vivid. For this reason, I believe there is an energy saving set by default during battery playback, which cannot be deactivated.

In this short video you can see the projection with sunlight at the beginning and immediately afterwards in the dark. The first video from YouTube is 4k but as anticipated the native resolution is 1080p, therefore it is played in this format.

The two 3W speakers of the BlitzWolf BW-VP4 do their job well but nothing exceptional. The volume is quite high, while the sound quality is a little flat and the highs and lows are barely noticeable. At home you can achieve much better results by connecting external speakers via the 3.5mm audio jack. And a discrete 2.1 is enough to enjoy a good movie.

A secondary function of this projector is the possibility of using it as a Bluetooth speaker via the dedicated button on the surface. In this case the projector lamp will turn off and the functions are limited only to audio. In my opinion it is a nice but relatively useful feature, as we are talking about a cylinder of almost 1kg with a battery sufficient for the projection of a single film and carrying it only for this would not make much sense.

The technical data sheet of the BlitzWolf BW-VP4 projector gives the Android system a good fluidity, without any obstacles or uncertainties and I honestly didn't expect much! Features that also allow you to run some games, I did some tests with Asphalt 8. Obviously a Bluetooth controller will be needed, I have tested it with this, compatible with any Android device.

As you can see from the short video above, it supports multitasking well. Although it is not possible to quickly switch between one application and another - but we are still talking about a projector - these still remain running quietly and the first start is always fast enough. As for the ignition, however, the startup time is about 20 seconds.

As for the temperature, this is around 60-70 °. For cooling, a fan takes care of it, which can be set to 5 different speeds. Or rather 4 different preset speeds and a fifth automatically managed according to your needs.

There is also good compatibility for transferring the screen from an Android smartphone thanks to the integrated function or via the EShare application. The transmission is quite smooth and smooth. I have not had the opportunity to try it with iOS but I am sure that the result is the same.

BlitzWolf BW-VP4 has a simple interface with the most useful applications on display. To move between these you can take advantage of the pad on the top surface of the projector, which also supports a simple double-touch swipe like the common pads of a Notebook. With a two-finger swipe, in fact, you can scroll a page. It does not support the long touch which, just to give an example, would be useful when writing to quickly type the secondary keys on the virtual keyboard.

Pleasant the mouse function from the remote control that does not use the classic keys as on many TV Box but just point and move directly the remote control to see the pointer in action. The speed of the pointer can be set in the settings. Also on the remote control we find a few more buttons, such as the home button in addition to menu and back, the navigation keys, mute, power off and focus keys to manually adjust the focus of the projector. In their place I would have preferred 2 keys to increase and decrease the zoom, since the autofocus does its job perfectly automatically.

To operate, the remote control needs 2 AAA batteries not included in the package. The connection with the projector is wireless and one of the 2 USB ports is therefore occupied. I would have preferred a Bluetooth connection so as not to sacrifice the USB port.

As anticipated BlitzWolf BW-VP4 is equipped with a battery with a capacity of 4000 mAh and fully recharges in just over 2 hours. The guaranteed autonomy is approximately 1 hour and a half: with the reproduction of a film with a maximum volume, the duration is 1 hour and 26 minutes, so here we are.

However, speaking of a portable projector, I must say that it is not enough. 1.5 hours is the average duration of a film, so if you would like to use it on the move exclusively for films there is a risk that it will turn off at the end. A less relevant problem if it had been possible to connect it to a power bank via a Type-C or micro-USB port. But, at least for the moment, it is not possible.

The price of the BlitzWolf BW-VP4 projector is around Ask us about international distributors, however, it is currently discounted on € 313 with free shipping from Europe and fast delivery in about 5 days.

8.6 Score
Excellent, greater autonomy would have made it perfect

All in all the Blitzwolf BW-VP4 is a good projector and the only real flaw is autonomy. Half an hour of extra life would make the projector even more interesting. For domestic use the fear passes and the projector is promoted with flying colors for any use you want to do with it.

Projection brightness
8.5
Image quality
9
Autonomy
7
Audio
8
Ease of use
9.5
Fluidity
9.5
PRO
AGAINST
Add review
Share
💣 Don't get away Xiaomi Mi Electric Scooter Pro 2 Global on offer for only 375 € with Mi Band 5 as a gift and free shipping from Europe!

Review Teclast F6: the best buy laptop for less than 250 €