WhatsApp officially on PC! No thanks.

Yesterday he arrived finally the update that we have all been waiting for, the update that allows us to use WhatsApp from PC, the update that forced me to disconnect from all social networks, because they were clogged with posts on this topic; all excited to share screenshots and articles from this blessed update: WhatsApp arrives on the PC.

But the curiosity was there, so I decide to try the PC web application, but nothing, no update for me. I search on APKMirror, but the latest version hasn't been loaded yet. "I'll try late in the evening" I said to myself, and so it was: still no update on the Play Store, but apk available on APKMirror. Well! I update, open the browser, type the address they suggest (web.whatsapp.com) and here is the first one sberla.

WhatsApp Web only works on Google Chrome. If you use Firefox, Safari, Opera, absurd Internet Explorer or any other browser, you need to install Google Chrome for WhatsApp functions on your PC.
It's okay that Chrome definitely eats one of the biggest slices of the pie made up of users who surf the web every day, and okay that "soon" will arrive on other browsers, but You Facebook pay 19 billion dollars to buy WhatsApp, you could not even give a few change to developers to ensure better, faster development, in short?

I use both browsers, then I open Chrome to see what WhatsApp is like. I connect again to the web application, which warns me that WhatsApp must be updated to the latest version and that I can access it by pointing the QR scanner that I find in the WhatsApp menu itself (on Android, for other OS it may vary). Second slap. "My device must remain connected to the network". “And why on earth?”, I wonder .. but I'll find out soon. Okay let's try it.

I start sending messages; I receive messages; disconnects - maybe my network's fault, I think .. no: phone connected, PC connected, WhatsApp connection lost randomly; and so on, but shortly afterwards what little enthusiasm that was left ends. I hear something that bothers me a lot, something that my ears until now, for some absurd reason, had ignored. Third slap: my smartphone is ringing for every message received !? I am chatting from the web, I often read the message instantly, but do I also get the notification on the phone? What?

Aside from the fact that web messaging apps have never gone down, my judgment - as you can easily deduce - is negative. Yes, it's true, graphically it's not bad (material design introduced), indeed, I have to say that I like it and message notifications - complete with sound - are not lacking (short display duration, in my opinion). The fact is that the negative aspects are much more than the positive ones.
I could also say that it is a great step forward, but at the same time - paradoxically, and looking at other apps - I can't say it: if WhatsApp took all this time to reach Chrome (and at present it may not satisfy the user), how long will it be before it reaches all other browsers - or at least the most used ones? Also, will there ever be a real application? And in this case, it will also be on Linux?

WhatsApp on the PC, therefore, at the moment it is nothing more than an "official mirror", something feasible already in the past, with other applications: AirDroid and WhatsAir to name a few. Will improve! I believe (when you don't know). Rumors about voice calls also prove this, but for the undersigned, only a mirror remains.

Finally, I wouldn't want to miss out on making comparisons with other messaging apps (there are enough on the net), but we have to say it: WhatsApp, far from being a paid application, is far behind the various alternatives. I report just this image found on Google, which shows the differences between WA and Telegram, in my opinion the best IM app at the moment and, among other things, .. 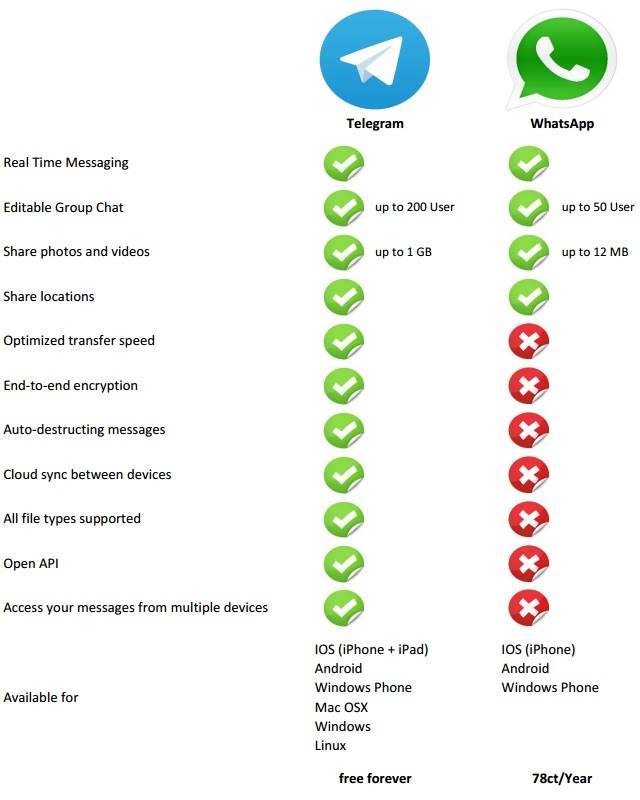 How to watch Netflix, Amazon Prime and Youtube in 21: 9 (Browser)